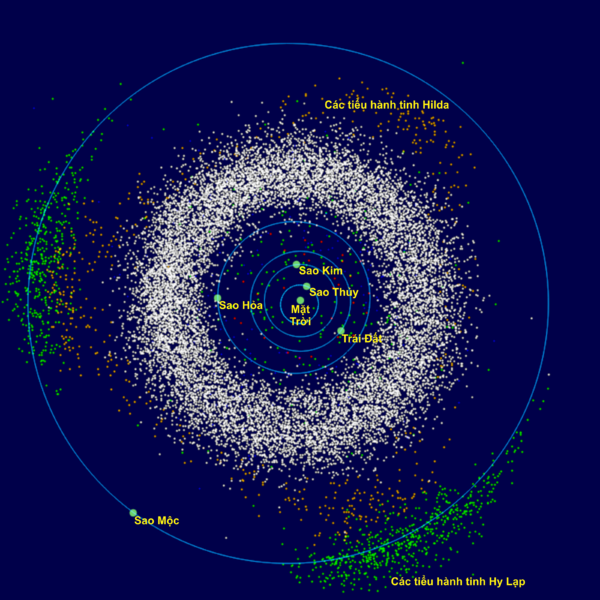 A small planet, with pale bluish light; the planet closest to the Sun. Never more than 28 degrees from the Sun, it is rarely visible to the naked eye. The Roman god Mercury and the Greek god Hercules, the winged messenger of the Gods, were endowed with the qualities that are associated with the influence of the planet Mercury. To the Chaldeans it was Nebo, the planet of warning; also associated with Buddha, the wise.

Ancient astrologers considered the existence of a planet nearer to the Sun than Mercury, to which they gave the name Vulcan. It has not as yet been discovered by astronomers. 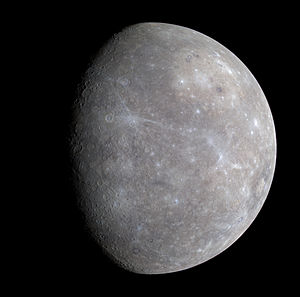 As with the Moon, and all satellites with reference to the planet around which they revolve, Mercury always turns the same face toward the Sun, except for a libration of 23° 7' in both directions: making a 47° zone of temperate conditions, and 132° zones of perpetual heat and cold.

To locate Mercury in the evening sky, find in the ephemeris the dates of its major elongation before or after a superior conjunction, and for 10 and 5 days before and after. Transfer into hours its R.A. and declination on these five dates, and plot its course on a star map, making note its nearness to known bright stars. Tilt this map toward the celestial North pole, and assume a horizon about 23° below the Mercury position. If weather conditions permit it can be seen with the aid of a field glass - sometimes even with the naked eye. 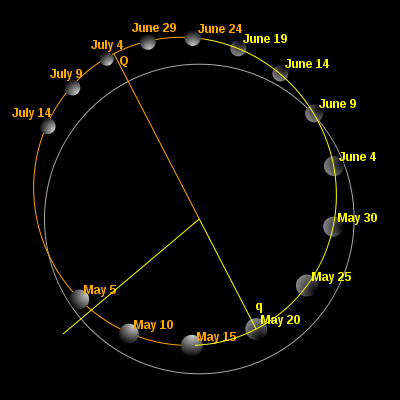 A brilliant planet reflecting a silvery-white light, it is the most brilliant object that illuminates the evening sky. The Greeks associated it with Aphrodite. To the Romans, it was known as Lucifer, when the Morning Star: and Vesper, when the Evening Star. To the Chaldeans it was Ishtar, and compared to the Sumerian virgin mother, the "Lady of Heaven," and the goddess of fertility.

Like Mercury, Venus exhibits phases, from a large twin crescent at the Inferior Conjunction, when it is closest to the Earth, and some- times visible in daylight if you know where to look for it, to a small round orb at the Superior Conjunction, when it is on the opposite side of the Sun from the Earth. After the Superior Conjunction it is an Evening Star, and thus is visible in the evening, sky after sun-down, setting later each evening until it reaches its maximum elongation of about 47° - at which time it sets about 3 hours after the Sun. 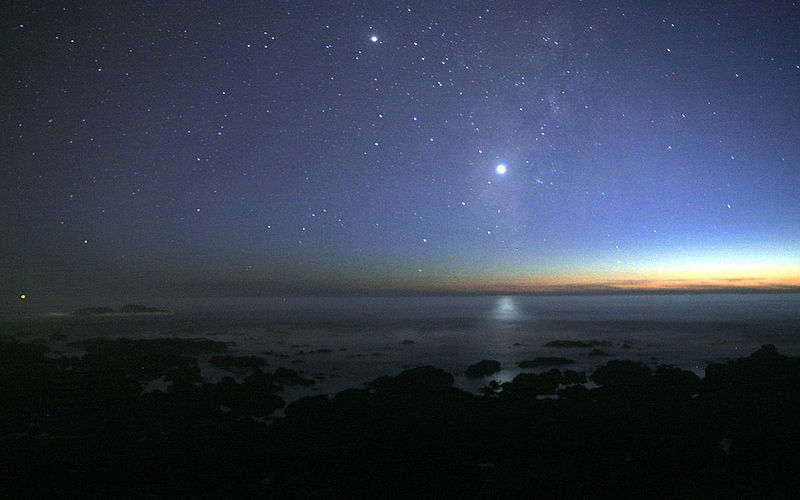 Its rotation period has never been established because of the layer of clouds in which it is perpetually enveloped. Its period has been variously estimated at from 68 hours to 225 days. Its axis is inclined to its orbit plane at an angle of 5 degrees. Its low albedo, or reflecting power (.59), is due to this constant cloud covering. The periods when it is a Morning and Evening Star are of about 10 months' duration each. 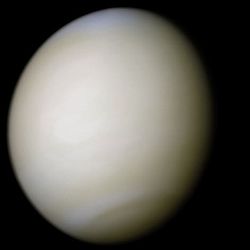